Fewer than 10 per cent of new-car dealers market directly to customers with credit difficulties.

Nonprime accounts for 20% of the Canadian vehicle loan origination…

Therefore the vast majority of Canadian dealers loose 20% of their sales due to credit declines. That’s a LOT of vehicles my dealer friends.

A lot of dealerships don’t go after the nonprime market because they’re afraid it’s going to tarnish their brand. But these dealerships never lay the right strategy to attract these buyers in a way that doesn’t damage their image.

They may also have F&Is that can’t convert nonprime into approvals. I’ve also seen dealers that rely on individuals in their F&I department instead of a strategy on how to address this segment.

Often these nonprime specialized F&Is move from dealers to dealers, leaving no legacy nor proper processes.

I believe the vast majority of dealers already know this.

This is why we built Lucy, our Automated Decisioning Platform. Lucy is a virtual nonprime F&I expert.

Ask us for a demo and start turning declines into sales! 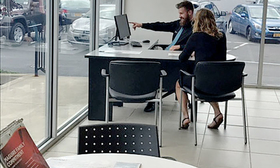 A Nova Scotia dealership group is changing its ways by courting customers who don’t qualify for prime-rate loans or manufacturer incentives.

“We had a lot of people coming into our store that we were losing because we weren’t properly qualifying them,” said Donovan Bingham, nonprime manager at Bruce Auto Group in Yarmouth, 330 kilometres west of Halifax.

By employing a strategy that starts in the F&I office instead of the showroom, the group has generated new sales and repeat business, Bingham said.

The strategy has contributed to about 700 nonprime deals in 2018 and at least 800 this year so far, so it definitely works.”

Kim MacPherson, who in June launched a Halifax, N.S.-based nonprime purchasing storefront called Buy It Smart, has been training dealerships on the nonprime market since 2005. Dealers who don’t accommodate nonprime customers can lose an average of 20 per cent of their deals in the finance office, she said.

“All our marketing and advertising gears people  toward picking their vehicle  first, getting emotional, fall-ing in love with that vehicle,” MacPherson said. “It’s like a real estate agent going over to the million-dollar houses when the guy’s like, ‘I don’t know what I can get approved for, I went bankrupt a year ago, and I don’t have a job.’ It doesn’t make any sense.

“If you can redirect the customer and have them think about the finance piece of the sales process first, then we’re able to determine how much money and at what rate the customer qualifies for. [And] if you showcase for the customer the vehicles that they can actually have at the payment they want to make, your chances of closing the deal are a hell of a lot higher.”

Bruce Auto Group, which has five rooftops in Nova Scotia, followed MacPherson’s advice and beganusingthisapproach about two years ago.

Nonprime customers are asked how they would rate their credit history, “with 1 being not so good and 5 being perfect,” Bingham said. “If they told us anything below a 5, we would immediately say the best thing for us to do is [talk to] one of our credit specialists.

“It was very simple. We haven’t had an objection yet.”

NEW OR USED? IT DEPENDS

The right vehicle can be new or used; it all depends on the customer’s credit history, Bingham said.

“We take a look at the credit and the approval and work with the customer to select what fits their needs,” he said. “Many franchise stores have excellent subvented subprime rates, such as Mazda, Kia, Hyundai and General Motors.

“A client may qualify for 10 to 15 per cent on preowned, but there may be a new-vehicle subprime program that gets that same customer a 5.99 per cent rate on new. It’s case by case, really.”

While dictating what cars a consumer can buy might feel counterintuitive, it’s the key to his system’s success, Bingham said.

‘We’re going to do this fo 12 months, and we’re going to take a look at your credit profile again. We’ll try to save you as much interest a possible by upgrading into your next vehicle.”

“Those people are ecstatic because even if they’re carrying forward $4,000 in negative equity, the spread there in payment that you can work with gets them into a much better vehicle and better interest rate.”

Dealership staff who are empathetic and motivated by helping others are the most likely to be successful nonprime managers, MacPherson said.

“Identify that salesperson that really gets the concept of listening to the customer’s problems, having empathy and being able to come up with solutions, ha good paperwork and is great at sales,” sh said. “When given the authority in that position, they just skyrocket. It’s amazing.”

Bingham said that if the process is well managed, customers successfully upgrade out of lower-cost vehicles after 12 months, allowing cars to return to the store’s inventory and begin the same pr cess for another customer.

“You’re basically just recycling your inventory,” he said. “You’ve got to have a good supply of those cheaper cars because that’s where you need to start.

“If you jam them in [to an expensive vehicle] the first time they have too much negative equity, and you can’t refinance

them in 12 months. But if you set your strategy up properly, I’ve got it timed out to about three transactions for five years.”

That leads to customer retention, Bingham said, “because they know you’r not milking them. They appreciate the advice. They like the fact that you’re put ting a plan in place to rebuild their credit and get them a vehicle.”